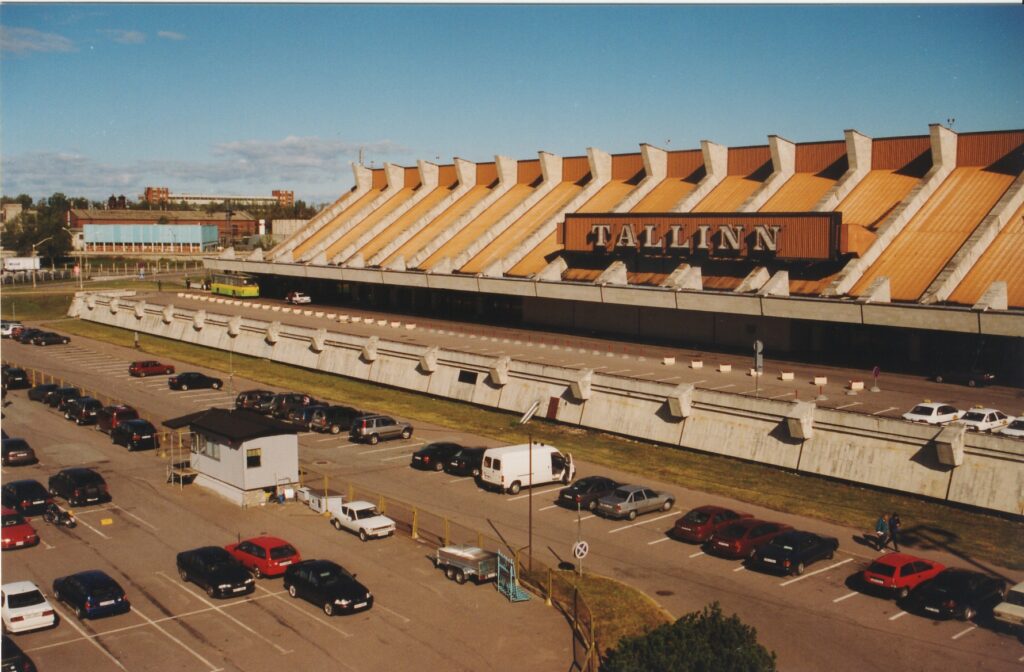 This autumn, ACE Logistics Estonia celebrated 30 years of operation. The company started in 1992 in Tallinn airport with air transport. At this point, it would be appropriate to take a look at the history of the company through various locations via the memories of our senior employees.

In the first year, the company had two tiny offices in the basement of Tallinn Airport. The main tools at that time were a typewriter, a desk phone, a calculator and a fax machine. The IT manager just started developing computer programs and soon after that computers replaced the typewriter.

After some time, ACE’s activities went to a so-called new level 😊 – from the basement floor to the VIP rooms of the airport, where there were comfortable brown armchairs and sofas from the time of the Soviet era. You could easily have spent the night there because the working days were very long in the early years of the company. Unfortunately, it was impossible because the airport was simply closed by midnight. To recall, there were no windows in the VIP room. During the winter period, people came to work in the dark and went home in the dark😊. If you managed to go out for a lunch, you squinted your eyes, when you saw some daylight.

In 1995, we moved to a new building, at the address Lennujaama 2. The freight forwarders room was also in that building without windows. Again workers sat in relative darkness and squinted our eyes when we went into the sun. A funny memory from that time was when fresh flowers were transported by plane from the Netherlands to Estonia. One time, the plane was delayed for a long period and the flowers were no longer suitable for sale, so that evening, everyone went home with large bunches of flowers. A very vivid memory is from a big mess-up, where very important boxes were mixed up during the transport. Namely, the box of spare parts for the fishing trawler and the box of the sample batch of fish fillets were mistakenly exchanged at our terminal. Instead of spare parts, fish fillets were brought to the fishing trawler by helicopter, and a European gourmet restaurant received ship spare parts instead of a sample batch of fish fillets😊 We could only imagine the confused faces of the recipients of the packages! Later, there was a proper explanation and correction of errors to do – fortunately, such situations did not happen often…

In 1998, the company moved to Kesk-Sõjamäe 10a. The most remarkable memory from that time is the pipe post, which was created for communication between the two floors. It was a very big thing at that time and, of course, also saved a lot of leg work, since the documents had to be sent both to Cargo Handling on the first floor and to the customs department at the other end of the building.

During the Kesk-Sõjamäe period, the focus was on fresh fish, mushrooms, and berries – those were a weekly air shipment during the summer season, and there was a lot of work involved. Kesk-Sõjamäe also housed the ACE Logistics road transport terminal and the customs department.

In 1999, the new office and warehouse building of ACE Logistics was completed at Sepise 1. It was the first building, which was built according to the wishes and needs of the company. In the Sepise office, in addition to air transport, road transport also began to grow rapidly.

Initially, communication with long-distance truck drivers was done in such a way that time schedule was agreed upfront in the office, and when the driver was abroad, he had to call from a phone booth if a problem arose. The driver immediately took all the tasks with him on a two-week trip to Europe. If something happened to the truck, the driver repaired it himself or called again from a phone booth and a mechanic drove there from Estonia to fix it. Pagers and mobile phones came later, and most of the communication was via landline phones. The job of a driver was very popular at that time, because you could travel a lot. Initially, orders were received mainly via fax, after that e-mail came and now most of the orders come via e-environment(e-ace). The Sepise building operated for 20 years, but during the final years it was already very overcrowded.

After a long waiting period, the new logistics center of ACE Logistics was completed in 2020 in Rae municipality, Rukki tee 12, Lehmja. Due to COVID, office workers could not fully use the benefits of the new building for a long time. However, gradually the virus subsided and the office was filled with happy employees. International road transport, as well as domestic transport, increased rapidly in Rukki tee. The flight department now had to get used to not being able to see the airport from the window. After moving to the new building, the volumes of railway transport continued to grow strongly and sea transport containers also had to be loaded more and more frequently. In the beginning, the warehouse was only half full of shelves, but when all the shelves were finally in place, the warehouse got also 100% full. The terminal was immediately filled with goods and the question arose, whether a larger logistics center should have been built? It is good that enough spare space was left in the meadow to expand if necessary. At the moment, aceBees have rented it out😊

We hope that the workflow will continue for several more decades!

This website uses cookies to improve your experience while you navigate through the website. Out of these, the cookies that are categorized as necessary are stored on your browser as they are essential for the working of basic functionalities of the website. We also use third-party cookies that help us analyze and understand how you use this website. These cookies will be stored in your browser only with your consent. You also have the option to opt-out of these cookies. But opting out of some of these cookies may affect your browsing experience.
Necessary Always Enabled
Necessary cookies are absolutely essential for the website to function properly. This category only includes cookies that ensures basic functionalities and security features of the website. These cookies do not store any personal information.
Non-necessary
Any cookies that may not be particularly necessary for the website to function and is used specifically to collect user personal data via analytics, ads, other embedded contents are termed as non-necessary cookies. It is mandatory to procure user consent prior to running these cookies on your website.
SAVE & ACCEPT